AN INDEPENDENT DOCUMENTARY ABOUT THE EXPERIMENTAL SCENE IN        NEW YORK

Community, Activism and the Downtown Scene — an independent documentary about the experimental scene in New York addresses the changes in the social, political, cultural and aesthetics arenas since the 1960’s. The documentary was conceived as an attempt to understand how geographical artistic migration, the role of community, feminism, AIDS and the economy have transformed the experimental arts in New York City.

Capturing a crucial moment just before the election that would grant George W. Bush his second mandate, the documentary reveals the artists’ concerns with the political and cultural establishment, and exposes current perspectives on the meaning of “artistic community”, after more than forty years of its initial effervescence in the city.

The documentary is a feasible record from my experience relating to the downtown scene. It   introduces the history of experimental arts in New York counting on the depositions of several artists from theater, dance, visual arts, and performance, such as Ellen Stewart (La MaMa), The Living Theatre, Lynn Book, Tere O’Connor, and Guerrilla Girls, among others.

The 110 minute-length film was recorded  with a handcam in 2004 with the initial intent of sharing an intimate depict on New York’s scene with my artistic community in Curitiba/Brazil.

This documentary was conceived by Cristiane Bouger in 2004 and was produced with personal funds and collaborative work, with additional support by Elide Soares (New York) and epa! (Curitiba). 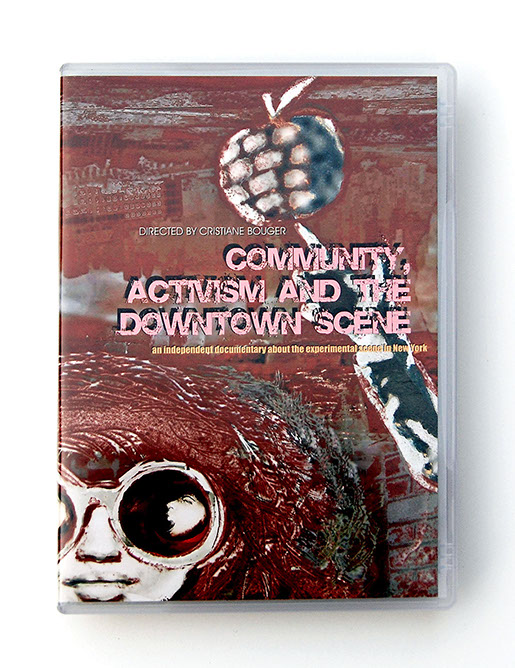 BE A SPONSOR OF THE TRANSLATION AND DISTRIBUTION OF THE DOCUMENTARY "COMMUNITY, ACTIVISM AND THE DOWNTOWN SCENE"

Approximately 300 copies of this documentary were produced independently and as part of Circuitos Compartilhados (epa!/IPHAN) for free distribution to institutions in Brazil and featured artists in the USA. Copies were also sent to Madrid and Bucharest, where the documentary was featured in festivals and film screenings.

Currently there are no remaining copies of the documentary to serve institutions and archives worldwide.

If you are part of a cultural institution interested in sponsoring the translation of Community, Activism and the Downtown Scene and/or the production of copies for free distribution in your country, please contact me at the e-mail: bouger@cristianebouger.com