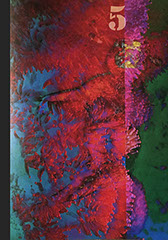 Abrigo Portátil – coleção em revista is a magazine conceived as an experimental platform for visual art works. It consists of 8 (eight) different issues on contemporary art, launched simultaneously in 2016 by Editora Medusa. The magazine is distributed in Brazil by Iluminuras.

Abrigo Portátil Editorial Staff is composed by Luana Navarro, Arthur do Carmo, Eliana Borges, and Ricardo Corona.  For the issue Performance,  Medusa invited Cristiane Bouger to be a Guest Editor.

An extended version of Abrigo Portátil  # 5 [ performance ] is available online.

Along with the original content of the magazine, the online #5 brings the Manifesto of Sex, Gender and Identity Freedom, by Margie Rauen, as well as several works in media (video and audio) of each artist  featured in the printed magazine.

Relâche was the online magazine of Casa Hoffmann– International Center for Movement Studies.